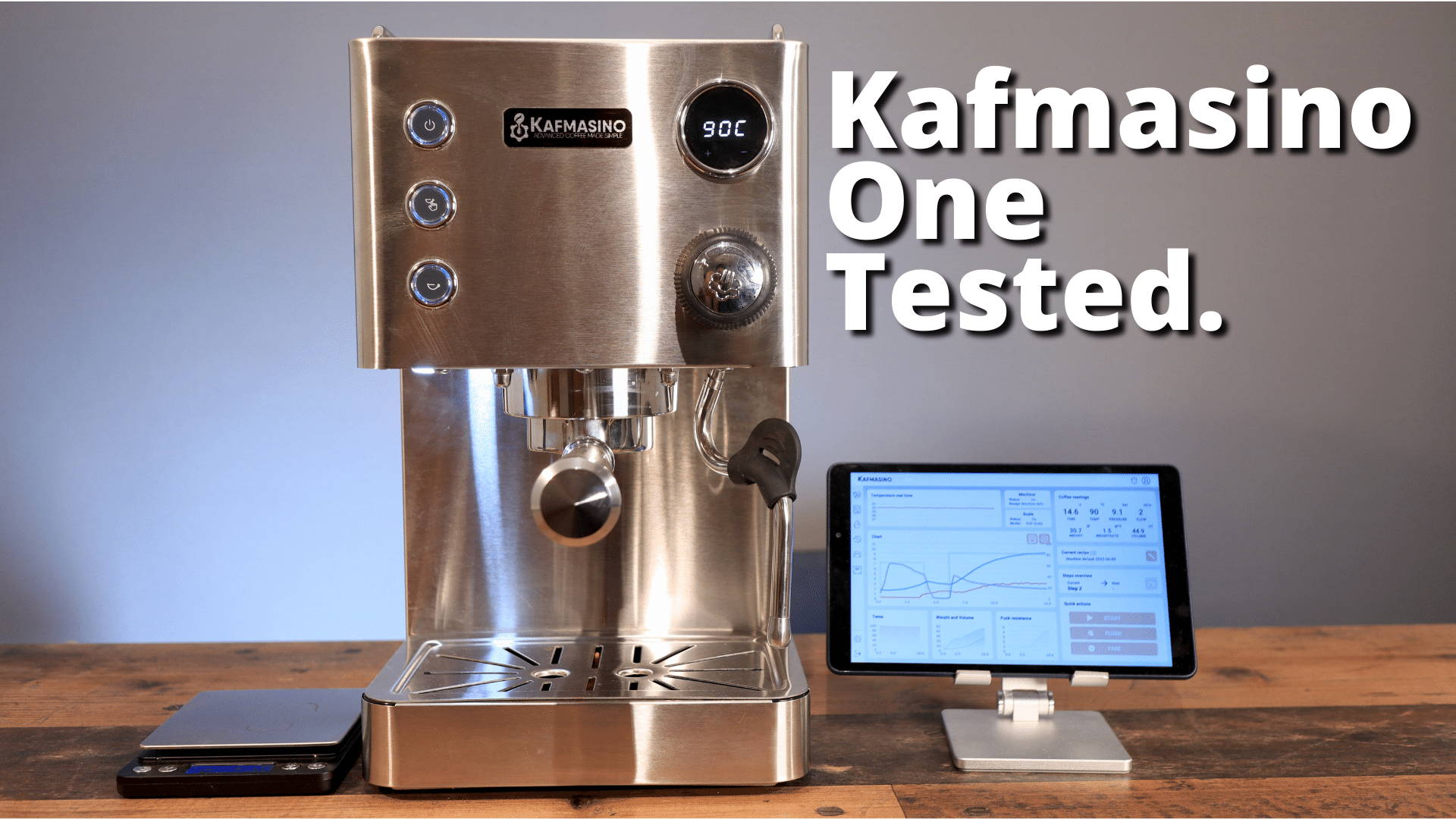 The Kafmasino espresso machine hails from Madrid, Spain, and is the culmination of the developmental efforts of two brothers; Jorge and Sergio. They started adding their own software to existing machines first, and then applied their findings to their own design. The result of these efforts is the Kafmasino One.

This review and corresponding video have been done without any compensation whatsoever from Kafmasino, and so this is a completely unbiased review. It was important to the brothers that my review not be tainted by earnings. When Sergio from Kafmasino approached me to do a review without compensation, I thought, “well I am a busy guy, but the engineer in me wants to see what this machine can do.” Thus, this review and video.

Some of the top features of this machine include gravimetric dosing, separate 550ml stainless steel brew boiler and dedicated thermoblock for steaming, a handy LED light to see the extraction, the aforementioned innovative fluid mixing temperature control, quick ready time of just 2 minutes, and of course the main feature: being able to flexibly program espresso and allonge profiles based on temperature, water flow, and pressure.

This machine is built with 304 stainless steel, and maintains a more conventional aesthetic, despite the many features. It also includes a cup warmer up above, as well as a very handy extraction and steaming timer.

The included app can be used to choose an existing recipe, or create a new one. The shot can be analyzed, saved, and evaluated. The machine firmware is updated from the app, and updates for minor bugfixes have been very expedient and stable.

The Kafmasino app contains quite a lot of information. On the main screen, we see some real time values such as the temperature and current machine status. We also see all the pertinent information from the last espresso extraction, such as elapsed time, final pressure, flow rate, output weight, and volume. Maybe the most interesting item on the main screen is the chart, which exhibits the temperature, pressure and flow curves of the extraction in real time. Finally, there are some quick buttons on the lower right, to flush the machine, and start and stop an extraction.

Looking at the other screens, there are recipes which can be used as they were downloaded, or made up from scratch. Recipes can be built in steps, where flow, pressure and temperature can be adjusted as desired. There is also a community section, where recipes can be shared, and users can rate their favorite recipes.

Another nice feature is the ability to add a data set to each shot after the extraction. All of the extraction data will be saved, as well as user input data such as bean, roast, grinder, grind setting, barista, and so on. This helps to remember which was your “God shot.”

Finally, the app also contains a clear settings screen, in which settings for the machine can be parameterized, such as standby time, automatic switch on times, and so on.

Neutral: casing made of stainless steel 304, so not magnetized

Kafmasino One vs. Decent DE1

The Kafmasino One shares some similar technologies to the DE1, such as the fluid mixing module, and pulse modulated steam production, but it differs in many ways. To start off with, the One looks more like a traditional espresso machine. It also includes haptic controls, such as the steam knob, and the pushable buttons to start and stop a shot, as well as flush the group head. Additionally, it has a cup warmer on top, whereas the Decent DE1 omits the cup warmer. Finally, it includes both an Android and iOS app, and costs right around half of the DE1.

For the demonstration, we will choose a shot from the recipe book, adjust it for 40 grams out, and send the updated recipe to the Kafmasino One. Then we will flush the grouphead, pull a shot, and view the pressure and flow curves afterwards. Finally, we can save the details of our shot, such as bean used, grinder setting, and result in the cup.